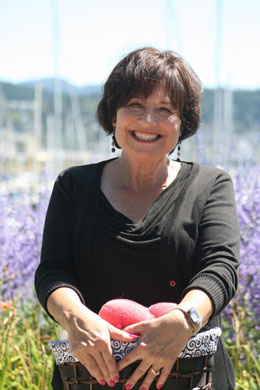 In 2011 I was diagnosed with breast cancer. While struggling with the shock of the news, I was initially self conscious and embarrassed that I needed to have a mastectomy… so I avoided telling very many friends. Those that I did tell, I was quick to add that I was going to be immediately reconstructed. Well, it didn’t turn out that way. Due to complications I had to go to plan B which involved an implant and tissue expansion. I was at a loss as to what to wear to appear “normal,” so that I could get back to work. I called the local cancer society and asked about acquiring a prosthesis. The woman replied, “Oh honey, you can’t put anything on that scar for at least six weeks”. SIX WEEKS!!!!! What was I going to do for six weeks ? I had work to get back to, life to live. That was the first time I cried.

The next week at the doctor’s office I picked up a brochure for a typical silicone prosthesis. I was holding it when the doctor walked in. He said to me, “most women are not real happy with that as a solution, it’s too hot, heavy and expensive”. But what was I going to do? He asked me, do you knit? Well, yes, I do, I said. He explained that he didn’t have one to give me but he had a picture of a “knitted knocker” and a link to a place to get the pattern. I took that home and immediately emailed it to my dear friend and super knitter, Phyllis. I told her I was not physically or emotionally able to knit one right now but would she consider making me one? That Sunday I stuck a sock in my bra and wore a jacket and ventured out to church. Phyllis delivered two beautiful knockers to me in a Victoria Secret bag :-). I took them right into the bathroom stall and stuck one in my bra. It was FABULOUS! It was light, pretty, soft and fit in my own bra perfectly. I took off my jacket and knew right then that I wanted to make these available to other women going through the same situation. I thought, “what if my doctor had real knitted knockers to give to women rather than only having a photocopied picture on a sheet of paper to show them?”

I asked my breast cancer doctor and plastic surgeon if they would hand them out if I could provide them with a regular stock of these Knitted Knockers. They said they absolutely would. My doctor informed me that in our little northwest county alone over 200 women a year are diagnosed with breast cancer. Of those about 50 have mastectomies. He said that not only are these good solutions for those who choose not to be reconstructed or have to wait for reconstruction but they also work for those who have had lumpectomies and radiation which can shrink the breast. In those cases just removing some stuffing helps to keep things balanced. In my case, as I went through the inflations required in my reconstruction I just kept taking stuffing out through the process. Then you add to those numbers the number of women who through the years have just quit wearing their prosthetics due to them being uncomfortable, not fitting any more, or being too expensive… and the potential demand was huge. My goal was to provide free, accessible, beautiful knitted knockers to anyone who needed them in my county. I am pleased to say due to a wonderful network of volunteer knitters, that we have been successful in doing that. I have been unwilling to let any request go unfilled, so I’ve been mailing them all over the world.

No one group can meet that kind of demand so the purpose of this site is to have a one stop place where anything you want to know about knockers can be found here. The site is a work in progress but will have information on how to set up a knitted knocker volunteer group, how to approach doctor’s office’s, clinics, and locations to distribute them and ideas of displays to set up to attract knitters and distribute knockers. Patterns are available on the website. Videos and resources on how to make knockers are available and we just keep adding more as we see the needs and ideas expand. Together we can make this happen!

One of my greatest joys is getting a call from a doctor on my cell phone requesting some more knockers. One of the nurse’s said to me, “I sure wish you could be there when we have a woman who is dejected, wondering what they are going to do and we bring out the bag of knockers. They always bring a smile to their face at a difficult time, and sometimes tears.”

I don’t need to be there to see it. I know, because I was one of them.